This is the final post in our Academy of Music history series. Thank you for joining us on the journey!

At the end of 1935, the Academy experienced two big changes – a woman on the board of trustees and a lease agreement. Longtime board member Chauncey Pierce had passed away and the board was left to fill a vacancy. At the December 13th meeting, the trustees elected their first female member, Mary K. Brewster, who had been involved with The Northampton Players for many years. In addition, the current general manager and profit sharing partner with the Academy, Charles Rackliffe, was experiencing ill health and gave notice that he would be discontinuing his operations with the theater.

Frank Shaughnessy came before the board of trustees with a proposal to lease the theater, along with Albert Desautell of Holyoke and Stephen Broidy of Boston. They offered to equip the theater with a new heating system paid for with funds from the new Public Works Administration, cover their insurance obligations, and follow a schedule of rental costs to local performing arts groups. It was noted in the lease that the “350 seats in the balcony, the booth equipment and all stage draperies are the property of C. W. Rackliffe.”

The lessees were also granted an option to extend their lease five years.

Frank Shaughnessy submitted a personal letter to the Academy board members, which read,

“Familiar as I am with the operation of the Academy of Music after 10 years in serving the people of Northampton with entertainment, I feel that with the proper policy of operation of the Academy that we should do a normal business. It is not my expectation to be able within the first year to achieve any great success, but I do feel that with time and a careful study of the proper type of entertainment that we can again bring success to the Academy as in former years.

“As has been my policy in the past I will always be mindful of the Deed of Gift of the donor of the Academy of Music to the City of Northampton, striving always to please the greatest majority of citizens at all times.”

He signed it, “Very truly yours, M. F. Shaughnessy, Mgr.” His story and tenure at the Academy ends five years later with the beginning of World War II.

Join the Academy of Music at Nobody’s Girl on October 17th & 18th for its Grand Re-opening following interior renovations: new seats, repainting of the auditorium, refinishing the oak floors and more. 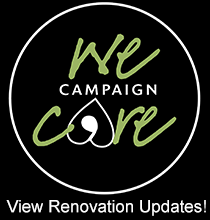 We Hit Our Goal!
Click to see renovation updates SIGN UP FOR OUR SUMMER MUSICAL THEATER WORKSHOP SUBSCRIBE TO OUR NEWSLETTER DIRECTIONS TO THE ACADEMY OF MUSIC